In an automobile draped in yellow bunting (right), stamped in large black letters with the words “Suffrage Special,” and “Votes for Women,” Mrs. J. M. Young along with Mesdames Fitzhugh Lee, Rena Maverick Green and Mattie Walthall Leman leave for Floresville to promote the Equal Franchise Society and women’s suffrage.

1993
Bill Miller Barbeque Enterprises donates the site of the former Fiesta Plaza Mall (derisively referred to as the “pink elephant”) to the University of Texas system for a downtown UTSA campus.

1916
The newest thing in the Army is a motorcycle radio section. It consists of the complete equipment of a field wireless carried on three sidecar motorcycles.

1932
Qualified Negro voters in Bexar County will be permitted to vote in the Democratic primary election tomorrow under terms of a mandatory injunction.  Attorney Carl Wright Johnson argued that the courts have granted relief to white voters deprived of the privilege of voting and that the same relief should be open to negro voters deprived of such privilege.

1946
The possibility of opening two or more of the city’s swimming pools will be considered tomorrow by Park Commissioner Henry Hein.  Commenting on the fact that military pools are open, Hein said, “The polio germ is so smart it does not step across the government line.  It respects Uncle Sam.”

1910
Work is progressing on a new aeroplane shed at Fort Sam Houston to house the new Wright aeroplane.

1916
In an effort to reduce accidents, all slow-moving traffic will be compelled to keep to the right-hand curb on downtown streets.  Buggies and wagons can’t compete with fast-moving autos.

1980
The public is invited to a reopening of the Jersey Lilly saloon at the Pearl Brewery on Valentine’s Day tomorrow.  Guests can avail themselves of a free glass of Pearl beer or other refreshments.

1916
San Antonio’s Christmas this year is the most bounteous and prosperous in her history. It has been estimated that no less than $6 million has been spent for gifts, an increase of about 25 percent over previous banner years.

1941
The San Antonio Express praises the new Christmas lights on the “newly-beautified banks of [the] San Antonio River.”

1945
Christmas gift checks totaling approximately $6500 are being presented by the Continental Trailways Bus system to its 100 employees in San Antonio.  Amount of the checks was determined by length of service with the company.

1913
The State Department has instructed Ambassador to Spain Willard to obtain a copy of the original charter of San Antonio granted by King Ferdinand VI in 1773.

The University of Texas defeats Oklahoma A&M, 14-6, in a game played at League Park here in San Antonio.

1975
The Ace in the Hole band, featuring singer George Strait, plays their first concert – just up the road at Cheatham Street Warehouse in San Marcos.

1916
San Antonians are looking forward to the tomorrow’s football clash between the University of Texas and Oklahoma A&M to be played at League Park.

1939
Restoration on La Villita begun with O’Neil Ford as architect.

Country-western group Alabama makes their first appearance in San Antonio at the Majestic Theater.  San Antonians evidently had not heard much about them because the crowd was estimated at between 100 and 200 people. 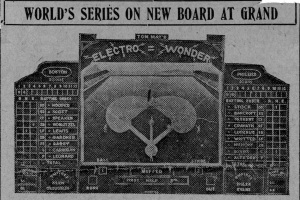 1977
At a northside restaurant, Hollywood actor Earl Holliman announces plans to open a dinner playhouse at the site of the defunct Hacienda Dinner Theater on Nov. 1.  “There are a lot of big stars who want to come to San Antonio. We are going to give them that opportunity – and give people here a chance to see them,” says Holliman.

1955
The San Antonio Independent School District was going ahead with plans to integrate white and Negro pupils in the city’s public schools. 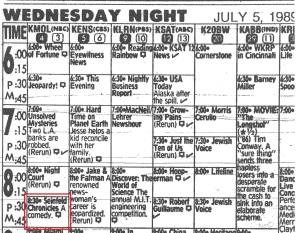 “Seinfeld” premieres on KMOL on a Wednesday night as “The Seinfeld Chronicles,” with the terse description – “A comedy.”  The second episode would not air until May 31, 1990.

1923
San Antonio’s Klan #31 branch of the Ku Klux Klan donates $15 to Second Baptist Church, an African-American congregation, toward their expansion fundraising goal of $5,000.  Rev. I. H. Kelley is dismissed for accepting the money.

1913
On this day in 1913, Ignacio E. Lozano founded La Prensa, a Spanish-language daily newspaper published in San Antonio to address the needs of Mexicans residing temporarily in the United States who wished to follow events in Mexico, which was engulfed in the Mexican Revolution.

1916
In an effort to reduce accidents, all slow-moving traffic will be compelled to keep to the right-hand curb on downtown streets.  Buggies and wagons can’t compete with fast-moving autos.