1925
Despondent over the drowning death of his only son nearly four years earlier, Alexander Joske fatally shoots himself. In mourning, Mayor John W. Tobin honored the merchant and community leader and ordered city flags flown at half–staff. Joske Brothers Company closed for two days, while throughout the Southwest people remembered Joske as a pioneer merchant who had played a key role in transforming Texas retailing industry by leading the change from 19th century dry goods stores to the modern department store of the 20th century.

1935
Postmaster Dan Quill suggested San Antonians take a last look at the old post office as crews would begin razing it soon to make way for the new building.

1946
The polio ban test case against Playland Park owner Jimmy Johnson was “indefinitely postponed” today when City Attorney T. D. Cobbs stated that he was not prepared.  Dr. E. J. Arendt, acting city director of public health, expressed his opposition to the polio ban by saying, “What’s the use of having a ban if we can’t enforce it?  We are the laughing stock of the city.” 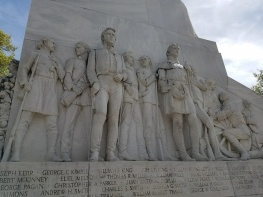 The final assault on the Alamo begins at approximately 5:30 a.m. Mexican forces take huge losses but capture the compound, killing the last of the 187 defenders who had held out within the walls of the fortified mission for thirteen days.

1925
Parachutes saved the lives of Kelly flyers, Lt. C. D. McAllister and Cadet Charles A. Lindbergh, today when their planes collided in mid-air.  This is said to be the first time that two pilots have saved themselves by use of parachutes after a mid-air collision.

1978
The new VIA Metropolitan Transit, successor to the San Antonio Transit System, officially takes over operation of local public transportation, although the transition from SATS to VIA has been going on for several months.

1973
Former President Lyndon B. Johnson is transported by airplane from his Johnson City ranch to Brooke Army General Hospital where he is pronounced dead on arrival.

1899
In excavating at the corner of Market and Corcoran Streets for a cellar for the new building, the contractor has unearthed a tunnel that is believed to lead from the Alamo to San Fernando Church and to be of the underground passages supposed to have been dug between the various missions.

1925
A one-inch snowfall, together with sleet, fell on San Antonio today, just three days too late for Christmas.

1989
Elliot Cohen, executive director of the Las Casas Foundation. says the damage to the Majestic Theater is not as extensive as it first appeared to be when a six-inch water pipe burst on Saturday, flooding the interior, after temperatures dropped to six degrees.  Cohen credited firefighters for getting the water out fast.  Cohen said that repairs will be “far less” than the original $150,000 estimate.

1925
The name of Waco Street is changed to West Ashby Place.

1949
The Kelly Drive-In Theater is opened.

1980
David Letterman’s morning talk-variety show debuts on KMOL Channel 4 at 10 a.m.  The show is a critical success, even winning two Emmy awards, but is cancelled after four months. 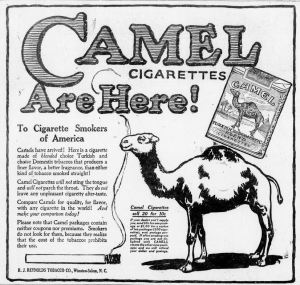 1925
San Antonio police found half of the $10,000 recently stolen from the Comfort State Bank.

1938
Ear piercing, an art of the ancient Egyptians and popular in society circles of olden days, is back in vogue in San Antonio. Ears are pierced by pushing a threaded needle through the lobe, leaving the string in their flesh. 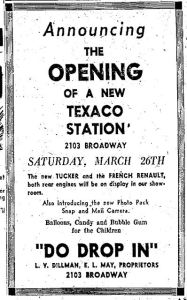 The new Texaco station at 2103 Broadway celebrates its Grand Opening with a display of the new Tucker and French Renault automobiles (right).

The final assault on the Alamo begins at approximately 5:30 a.m. Mexican forces take huge losses but capture the compound, killing the last of the 187 defenders who had held out within the walls of the fortified mission for thirteen days.
1894
Fireman Edward W. Hargrove was on the second floor at the Sunset Hose Company when the alarm sounded. He dashed to slide down the pole to the fire wagon, missed and fell to the first floor, breaking his ankle.
1925
Parachutes saved the lives of Kelly flyers, Lt. C. D. McAllister and Cadet Charles A. Lindbergh, today when their planes collided in mid-air.  This is said to be the first time that two pilots have saved themselves by use of parachutes after a mid-air collision.

1890
The first regular trip in San Antonio of an electric motor car was made on the Alamo Electric Street Railway Company’s track from Navarro Street to the International Fair Grounds, south of the city (Thompson-Houston system).  Since the date, all the main street car lines adopted electric motor cars of this and the Sprague system, replacing mule-drawn streetcars.

1925
The city health officer today urged that San Antonians desist from kissing until the current epidemic of colds go away. He admitted his proposal is impractical.

1967
Hertzberg’s, San Antonio jeweler’s since 1878, has completed extensive remodeling of its 113 E. Houston St. store that returns it to turn-of-the-century atmosphere.  Alvin Golding, executive director of Hertzberg’s, said remodeling is part of the firm’s plans to participate in HemisFair ’68.

1925
A new state law is passed, changing the name of the Southwest Insane Asylum to the San Antonio State Hospital. 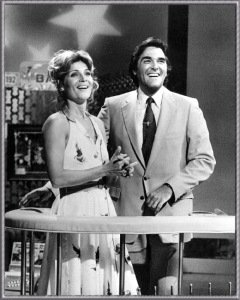 From today until Friday, San Antonio will be the center of attention on NBC’s “Wheel of Fortune” game show.  A couple of weeks ago, the show’s hosts, Chuck Woolery and Susan Stafford (right) spent time in the Alamo City filing the most beautiful attractions – the Alamo, the missions, the zoo, Fort Sam Houston and the market – to show the country.

1987
The Spurs use their No. 1 draft pick to select Naval Academy Midshipman David Robinson