1924
William Jennings Bryan lashed out against the teaching of Darwin’s theory of evolution in public schools in an address at Beethoven Hall. The orator was introduced by Gov. Pat Neff.

1940
The Empire Theater presents “Moon over Harlem,” a drama of racketeers and the women who love them.  The entire theater is reserved for “colored” patrons and begins at 11:30 p.m.  All seats are $0.25.

1922
The “Hobo Special” reached San Antonio this morning and police removed 32 tramps. This was the name given Southern Pacific freight train Extra No. 976 by the men in blue.

1947
After a three-day delay due to icy conditions, the Alamo Bowl is played in Alamo Stadium:  Hardin Simmons 20, Denver 0. Game only draws a crowd of 3,730 spectators. The temperature never gets above 26 degrees. 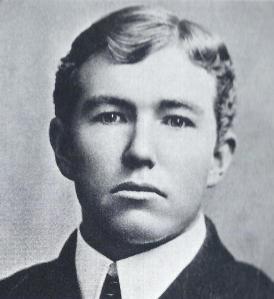 John Lang Sinclair (right), alumnus of the University of Texas and author of “The Eyes of Texas,” dies and is buried in Alamo Masonic Cemetery.  Items relating to the life of John L. Sinclair may be found in the DRT Library on the Alamo grounds.

1894
Because San Antonio was becoming “a major city,” the City Council voted an ordinance prohibiting swinging signs in front of downtown establishments.

1965
Atheist Madelyn Murray O’Hair, noted for her 1963 Supreme Court case banning prayer in schools, is arrested in San Antonio after a flight from Mexico City.  She is taken into custody and jailed under 11 warrants from Baltimore charging her with aggravated assault on policemen.  She was arrested at the Greyhound bus terminal after police missed her at the airport.

1906
The school board has ruled that starting this fall, the high school course will be lengthened from three to four years.  The additional time is considered necessary to master the difficult courses.

1939
Bexar County Commissioners Court in a special resolution passed this morning, censured the city of San Antonio for its “ill-advised” granting of a permit for a Communist Party meeting in the Municipal Auditorium.

1929
San Antonio’s annexation ordinance extending the city limits three miles in each direction, was passed on first reading by the city commission today.

1955
The 21st annual North-South All-Star high school football game is held in Alamo Stadium as the culminating event of the week-long Texas High School Coaches’ Association meeting held in the Alamo City.  The North team is coached by Mississippi State head coach, Darrell Royal, and the South is coached by Baylor University’s George Sauer.  The game ends in a 25-25 tie.

1922
A young man with a gunny sack full of marijuana was arrested by Detective Ruhnke this morning when he spotted the stems poking through the sack.  It is believed to be the largest quantity of the weed to be confiscated by police here since the enactment of a a law against its possession last September.

The Varsity Drive-In Theater at Culebra and Bandera roads holds its grand opening, showing “An Apartment for Peggy.”

1886
Work began in earnest on the new Opera house, with the first old shed occupying the building’s site taken away.

USAA is founded in the Gunter Hotel.

The Baylor Bears play the Haskell Fighting Indians from the Haskell Institute, a Native American school located in Lawrence, Kansas.  Haskell defeats Baylor, 21 to 20, in front of 4,200 fans at Schwab Field.  The Haskell team features John Levi, now enshrined in the American Indian Athletic Hall of Fame and Kansas Sports Hall of Fame.  The Baylor squad features Wesley Bradshaw at quarterback, now enshrined in the Baylor Athletics Hall of Fame and the Texas Sports Hall of Fame. From the 1900s to the 1930s, Haskell’s football program was referred to as the “Powerhouse of the West,” playing teams from Harvard, Yale, Brown, Missouri, Nebraska, Texas, Texas A&M, Oklahoma, Oklahoma A&M, Wisconsin and Minnesota.

1918 – World War I
Three planes from Kelly Field, flying in triangular formation, made the journey to Green Lake, Texas yesterday and returned – a distance of 130 miles – without ever breaking formation or being at a greater distance than 25 feet apart.  This is considered a remarkable record in formation flying.

1922
The Bexar County commissioners wiped a town out of existence this morning. This was the town of Viva, about 18 miles north of San Antonio on the Kerrville branch of the S.A.A.P. railroad.

Workers spend five hours removing the 4,000-pound marquee from the Texas Theater (right) only to have it bend and crumble due to structural rust.  The marquee was due to have been donated to the Institute of Texan Cultures.

1922
This morning, Judge James R. Davis submitted a petition from property owners in the settlement of Viva, between San Antonio and Leon Springs on the San Antonio & Aransas Pass railroad, that the streets and alleys in the 35-year-old town be ordered closed. The commissioners’ court granted the petition. Thus, the township was wiped out. There were no casualties.

1937
Mary, a 26-year-old spider monkey known to thousands of San Antonians, died in the Brackenridge Park zoo hospital this morning. She was the first animal to be placed in the zoo and the first spider monkey born in the U.S.